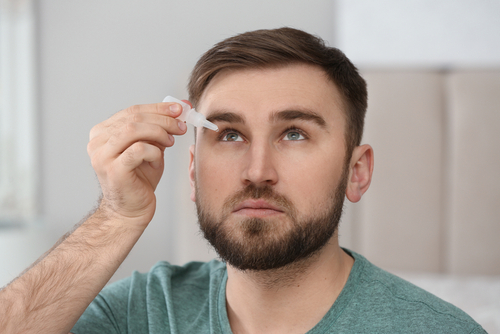 In 2012, Frank attended his GP surgery after experiencing pain and redness in his right eye for three days. He’d used contact lenses for many years, and his GP immediately referred him to the eye clinic at his local hospital.

Although they saw Frank the same day, they didn’t take a corneal examination. Instead, they diagnosed him with idiopathic anterior uveitis – an inflammatory disease that produces swelling and can destroy eye tissues. They prescribed him a course of steroids and advised to return for review in 7-10 days.

Frank returned 8 days later, and doctors found that his right eye vision had deteriorated by three times since their initial assessment. The doctors noted the cornea to have numerous punctate erosions. They diagnosed him with severe corneal epitheliopathy – a disease that results in dot-like staining of the corneal epithelium. Frank was then tapered off the steroids and advised to apply hourly ocular lubricants.

A week later, they reviewed Frank again and found no improvement to his right eye, and his visibility remained poor. At this appointment, they noted that Frank wore contact lenses, and so added an ointment to his medication. However, four days later, Frank’s symptoms became much worse. They then diagnosed him with corneal oedema – a swelling of the cornea that can occur following ocular surgery, trauma, infection, inflammation or as a secondary result of various ocular diseases.

The next week, a trainee ophthalmologist reviewed Frank and suspected acanthamoeba, an infection of the cornea caused by a microscopic organism called Acanthamoeba. This organism is usually found in bodies of water (lakes, oceans and rivers), as well as domestic tap water, swimming pools, hot tubs, soil and air. The trainee ophthalmologist performed a corneal scrape, and gave further confirmation of the diagnosis 3 days later. Finally, they commenced the correct treatment for Frank’s condition.

Most significantly, Frank permanently lost all sight in his right eye. Sadly, there’s no treatment to help alleviate the symptoms except for removal of the eye – a procedure neither Frank nor his treating clinicians wished to perform.

Frank struggled to return to work due to his sight loss and subsequently suffered from depression. He wished to start Cognitive Behavioural Therapy (CBT) to overcome his depression. Thus, he felt eager to settle the claim as soon as possible. We therefore negotiated with the Defendant and agreed a settlement of £160,000 to allow Frank to get the treatment he needed to move on from the negligence he’d encountered.

If you have suffered from a delayed diagnosis or an eye injury, our team could help you to claim compensation.

Please contact us so we can advise if we can help you on a no win, no fee basis.

Wrong Medication Given at Care Home

Lack of communication leads to six year delay in diagnosis