‘Palsy’ means weakness, and Erb’s palsy is a paralysis of the arm caused by nerve damage during delivery. This rare form of obstetric brachial plexus disorder affects two in every 1,000 babies. Its effects can range from mild to serious, depending on the severity of the injury. 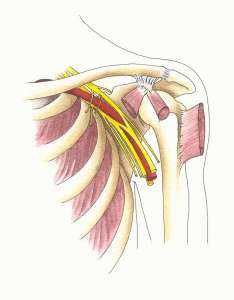 Illustration of the Brachial Plexus nerves by Alice Roberts on Flickr

The injury can affect the spinal cord’s ability to send messages to the arm, wrist, hand, or fingers through normal nerve impulses. Babies with Erb’s palsy may seem as if their arm is paralyzed.

When Erb’s Palsy can occur?

Erb’s palsy is most likely to occur during difficult labour but can happen in several different ways.

In some cases, the brachial plexus nerves are damaged when the baby is passing through the birth canal at an awkward angle. Injury can happen if the head is being turned to one direction while the arm is being pulled in the opposite direction.

Another potential cause is excessive pulling on the shoulders, which can happen when the baby is delivered face-forwards – also known as the Occipito Posterior position, or spine to spine delivery.

Another situation in which Erb’s palsy can occur is in breech birth. A breech birth is when a baby is born bottom first instead of head first. The brachial plexus nerves can be stressed and injured when the baby’s arms are pulled backwards over the head as the baby is pulled from the birth canal by the legs. In some cases, shoulder dislocation also occurs, but sometimes the forceful stretching alone can cause nerve damage to the brachial plexus.

The risks of shoulder dystocia

Aside from Erb’s Palsy one of the common risk factors for these difficult deliveries is when the baby is disproportionately bigger than the birth canal. If the mother’s pelvic opening is too small to allow for the baby’s shoulders to pass into the birth canal after the head has been delivered, this can cause the baby’s shoulder to be impacted. This is one reason why it is so important for medical professionals to be aware of the likely risks if a baby is considered to be measuring large for gestational age.

If shoulder dystocia occurs, it’s a medical emergency for both mother and baby. Once the head is delivered, the baby’s umbilical cord risks becoming compressed. Delivery needs to happen quickly to avoid oxygen deprivation, which can risk brain damage or, in rare cases, death. For the mother, the risk of excessive blood loss is increased. Midwives and obstetricians should be trained in shoulder dystocia, however, when this training is not properly applied things can go wrong.

Some other risk factors for Erb’s Palsy are;

This is the most common type of injury, which “shocks,” but does not tear the nerve. These injuries usually heal on their own within a few months.

This is an injury that damages some of the nerve fibres and may result in scar tissue. As a result, the scar tissue may press on the remaining healthy nerve. There is usually some, but not total, recovery.

This injury causes the nerve to be torn and will not heal on its own. It may be possible to repair a rupture.

Symptoms of brachial plexus birth palsy may include;

In some children, the affected arm is noticeably smaller than the unaffected arm. This occurs because nerves affect growth. As a result, the arm may grow at a slower pace.

Most infants with brachial plexus birth palsy suffer from Neurapraxia and will recover both movement and feeling in the affected arm. Recovery can be aided by daily physical therapy exercises. For infants who do not show signs of recovery in the first three to five months, surgery may be available to restore some function.

The rate of complete recovery after brachial plexus birth palsy ranges from 80% – 96%. The rates are higher when improvement is noticed in the first two weeks and dependent on many factors.

The first factor is the number of nerves that have been affected. There are five nerves in the brachial plexus, and in most cases, the first two are damaged.

Another factor is how badly the nerve has been damaged. This can range from the fibres being mildly stretched, to more severely pulled apart. A nerve can remain connected but if the injury is severe it may leave scar tissue, which can continue to affect the function of the nerves, A nerve that is completely pulled apart cannot repair itself, so the muscles it controls are paralysed. Sometimes it is possible to have an operation to mend the nerve and restore some function to the muscle, if this is necessary, the child is likely to be left with some residual weakness in the arm. In rare cases, the nerve may be torn away from the spinal column itself.

Sometimes, Erb’s Palsy can occur because of errors made by medical professionals during birth.

Some studies have suggested that this can sometimes happen when there has been an absence of adequate shoulder dystocia training, resulting in healthcare workers using excessive force.

Sometimes the injury may also be caused by poorly executed internal manoeuvres during a difficult delivery. Internal manoeuvres require the professional to insert their hands into the vagina to manipulate the baby’s position and are very difficult to perform. Inadequate training or experience may lead to mistakes. A common mistake is attempting to deliver the shoulder first, instead of the arm.

The Royal College of Obstetricians and Gynaecologists (RCOG) has a form that should be completed in the event of shoulder dystocia. If you are unsure about the events that occurred, this form should be in the medical records and give an accurate account of the birth, including who was involved and exactly what procedures were taken to relieve the obstruction.

Pryers Solicitors have helped many clients who have suffered Erb’s Palsy as a result of an error. If you would like any further information, we have a specialist team of medical negligence lawyers, who specialise in all types of birth injuries. Email or call us today to see if you can make a claim.

According to a report by the UK Lung Cancer Coalition (UKLCC), the survival rate of patients with lung cancer is being hit by late […]

The government has recently suggested that the four-hour waiting time target, a pledge set out in the Handbook to the NHS Constitution, will be […]

There's a large number of potholes placing cyclists in danger already, and the recent storms would have only made this worse.

You can report these portholes through @WeAreCyclingUK 'Fill that Hole' campaign: http://bit.ly/2UYVDJL