What is a Never Event?

Never events are, as the name suggests, errors in medical care which should never happen. They are usually both serious and preventable.

We have a page dedicated to never events if you would like to know more about them.

The NHS claim to be one of the only healthcare providers in the world that publish stats on never events.

On a monthly basis, they publish the cumulative total of never events for that financial year. They do this in the interest of transparency and in an attempt to tackle, what they see as serious issues.

The figures for the financial year 2019/20 look as follows: 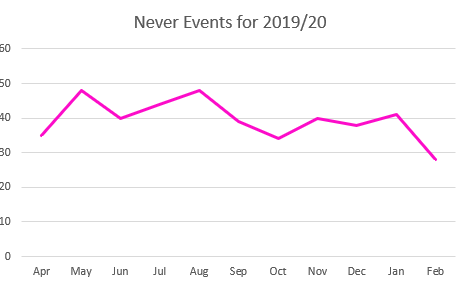 These numbers were reported in March – so do not include numbers for that month – and are subject to change as local investigations are completed.

A Reduction in NHS Never Events During the Pandemic

The graph shows a decline from 41 reported never events in January 2020, to 28 in February. But it’s not until April’s figures, published on 11 June, that the impact of the pandemic really becomes apparent. Only 15 never events were reported for the month of April.

The figures of March 2020 are currently unavailable.

In their publication, the NHS highlight that April was a key month in their response to the COVID-19 pandemic. Although they confirm that reporting continued, as normal. This would suggest that the low number of incidences is not due to a lack of reporting.

Instead, they attribute the sharp decline to the changes in service brought about by the pandemic response. All routine procedures were cancelled in the UK from 15 April. Since most never events relate to surgical and invasive procedures, this is likely to have been the dominant factor.

The NHS actually go as far as to say that this is why comparing data from different periods is inappropriate.

The Extent of Disruption

It’s been widely reported that the NHS postponed 2 million operations in response to the pandemic. This disruption was predicted to last 12 weeks and estimated to cost £1bn per month.

Figures from the NHS operational dashboard give some perspective as to the scale of the disruption. 40.9% of beds were unoccupied in the middle of April. That is about four times the normal percentage, which equates to tens of thousands of beds. Although the dashboard showed that departments tasked with the COVID-19 response were busier, in percentage terms – the overall number of people would be less.

Can they call it a Success?

The ability to control capacity by cancelling procedures was clearly a success in terms of the battle against COVID-19. However, it is not so clear whether the reduction in the number of never events can be called a success.

The reduction appears to have been a direct result of the mass cancellations, rather than improved patient care. It’s not even clear that the number of never events were less, as a percentage of all the procedures performed. It is conceivable that considering how many operations were cancelled, that the percentage might be higher.

This comes only months after the Association for Perioperative Practice (AfPP) were calling for action to be taken, after there had been little progress in the reduction of never events over recent years.

The AfPP are correct to highlight this. However, the NHS are also correct to point out that direct comparisons can not be drawn between different periods. This has never been more clear than with the latest figures.

That said, it is the NHS who control and share the data. So, in the interests of openness, it is incumbent on them to share it. Only then can we properly strive for true transparency and improvement.

How Pryers Can Help?

Pryers represent victims of all types of medical negligence, including those who have suffered because of never events. Contact us today, for a no obligation discussion, to see if we can help you on a no win no fee basis.

Ian Patterson jailed In 2017, breast Surgeon, Ian Paterson was jailed for wounding with intent. He had treated thousands of patients in his 14-year […]

Updates to the Civil Procedure Rules will come into effect on 6 April 2021. In this article, Jonathan Gray highlights some of the key […]

On 6 April 2021 an update to the Civil Procedure Rules will help vulnerable parties and witnesses to navigate litigation. The new rules acknowledge […]

Being injured by a defective medical product is rare, making it all the more difficult to know what you need to do.

One of our specialist solicitors Tamlin Bolton, has prepared a guide in case you ever find yourself in this unfortunate position.